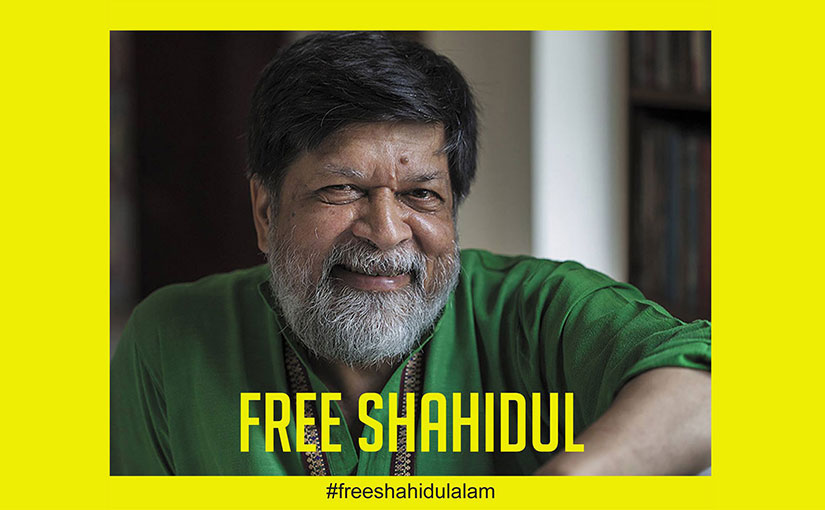 Shahidul Alam has been a close mentor and friend to photo.circle since its very establishment in 2007. He has played a key role in shaping and enabling our work. His vision, generosity, and courage has been an inspiration to us and we consider ourselves to be incredibly fortunate to have had the opportunity to learn from him. We are deeply concerned for Shahidul’s well-being and strongly protest his arrest and detention. We stand in complete solidarity with Shahidul and call on the Government of Bangladesh to release him immediate and unconditionally. We stand in solidarity with our friends and colleagues at Pathshala, Drik and Chobimela at this difficult time and strongly oppose the intimidation and silencing they are facing.

For updates on his arrest and legal proceedings, please visit the following pagebook maintained by friends and comrades of Shahidul Alam: https://www.facebook.com/freeshahidul/

According to credible media reports, renowned photographer and social activist Shahidul Alam was taken to the hospital for medical tests (as ordered by the High Court on 9 August 2018) on Sunday after 3:00 pm, and taken to the magistrate’s court later but not made present at the hearing.

Neither Shahidul’s lawyers nor his family members were present as the scheduled date for court appearance was August 14.

Detective Branch inspector and investigation officer Arman Ali appealed for him to be kept in prison until the completion of the investigation. The court ordered he be sent to prison.

The Bangladesh High Court on Thursday 9 August 2018 ordered the Government to arrange for further examination with regard to torture of Dr Shahidul Alam and to report on his condition by Monday 13 August 2018. Torture is defined under Bangladesh law as including both physical and psychological torture (see Section 2(6) of the Torture and Custodial Death Prevention Act 2013).

This follows receipt by the Court of a report earlier in the day from a government hospital regarding Dr Alam’s ‘illness’. Legal analysts say that the ruling today makes clear that medical examination for torture is different from examination for “illness”. It also clarifies that psychological and physical torture are different, and have to be examined separately.

Dr Shahidul Alam is recipient of multiple awards, including Bangladesh’s highest honor for cultural figures, the Shilpakala Padak (2014); the Lucie Foundation announced this year that he would be receiving the distinguished Humanitarian Award (2018). He is a photographer, academic, and human rights activist, and founder of the Drik Picture Library, and the Pathshala South Asian Media Institute in Dhaka, which has trained hundreds of photographers and is widely acknowledged for making Bangladesh one of the largest photography hubs in the world.

On 5 August 2018, after 10.00 pm, Dr. Alam was abducted by force from his apartment in Dhanmondi by approximately 30-35 men in plain clothes, hours after giving an interview to Al Jazeera Television on student protests over road safety and government repression. The men entered the building saying they were from the Detective Branch (DB), went upstairs, and brought down Shahidul Alam forcefully. His partner Rahnuma Ahmed (writer, also Drik director) who had been in a neighbouring flat heard screams and ran down with Dr Saydia Gulrukh (journalist, also Drik director), to learn from security guards that Shahidul Alam had been dragged and pushed inside a waiting HiAce microbus, which sped away with two other cars waiting outside the building. The guards, and the apartment owner who had also rushed down on hearing the shouting and screaming, told Rahnuma Ahmed and Saydia Gulrukh that of the two waiting vehicles, one had the letters ‘Sponsored by Popular Life Insurance’ written outside, the other, had the number plate, Dhaka Metro Gha 152836. The abductors held the guard, taped up the CCTV cameras inside the entrance and car park area of the building, they took away the CCTV camera hard drives and tore away the intercom wires. His partner Rahnuma Ahmed immediately went to Dhanmondi police station accompanied by Saydia Gulrukh and their apartment owner, she sought to file a First Information Report to Dhanmondi police station but the thana police said they would only record it on the order of their ‘superiors’.

Soon after midnight a UNB news report sourcing the Additional Commissioner of Dhaka Metropolitan Police (DB) Abdul Baten, said ‘a team of Detective Branch of police detained Shahidul from his Dhanmondi residence for interrogation over his Facebook posts on the ongoing student protests.’ Colleagues, photographers and friends who had rushed to the police station on hearing of Shahidul’s abduction, accompanied Rahnuma Ahmed to the Detective Branch office at Minto Road. They were told that the DB had 55 units and it would be impossible to find out which unit knew where Shahidul was, they were advised to return home and come back at 10.00 am. Rahnuma Ahmed, Saydia Gulrukh and two colleagues spent the night at the waiting room of the Detective Branch.

Following national and international outcry over the abduction, and a press conference held at Drik Gallery Terrace before midday where eminent citizens including professor Anu Muhammad, Khushi Kabir, Shireen Huq, Barrister Sara Hossain, Zonayed Saki and Tahmina Rahman demanded the immediate and safe return of Shahidul Alam, DB sources contacted Rahnuma Ahmed and asked her to rush to the DB office. She was told he would be released after signing a statement. On reaching DB office at Minto Road, she was told to go to the Central Command and Control Centre of the Dhaka Metropolitan Police (DMP) at Abdul Gani road. After a long wait there, Rahnuma, Shahidul’s lawyers Barrister Sara Hossain, Barrister Jyotirmoy Barua, Saydia and others were informed by Abdul Baten that they had Shahidul Alam in custody and were going to file a case.

Shahidul Alam was produced before the magistrate in CMM court, Johnson Road (Old Dhaka) at about 5pm. Alam could not walk unaided, was barefoot. He stated before the magistrate that he had been tortured in police custody, that he had been blindfolded, his hands had been handcuffed behind his back, verbally abused; at the place where he had been interrogated, a heavy weight had been placed over his head and he had been asked whether he could feel its weight, he had been punched on the face, his punjabi had become bloodied, it had been washed and dried and ironed before he had been produced in court; he had been accused of being a Mossad agent, had been threatened that Rahnuma Ahmed would be abducted, and that ‘pins’ would be used the next time). Witnesses say he showed clear signs of physical abuse. However, the magistrate did not record his statement and did not arrange for his medical examination, although this is required under Bangladesh law.

On 7th August, eminent jurist Dr Kamal Hossain, with Dr Shahdeen Malik, Sara Hossain, Tanim Hossain Shawon, Jyotirmoy Barua, Aynunnahar Lipi, and others, represented him in the High Court. Dr Hossain sought Alam’s production in the Court so that it could ascertain his condition, and also a medical examination. The Court ordered Dr Alam’s ‘immediate medical examination and treatment.’

On 8th August, Dr Alam was taken to the Bangabandhu Sheikh Mujib Medical University (BSMMU), and medical examinations were conducted on him, as informed by the Director of the Hospital, Brigadier General Abdullah-Al-Harun. Instead of being kept at the hospital for further observation and tests, Dr Alam was returned to the custody of the Detective Branch of Police the same afternoon. His lawyer was given no access to him and it was not clear what examinations were conducted.

The Government in the meantime moved to a higher court (the Chamber Judge of the Appellate Division) seeking to stay (suspend) the High Court order for medical examination. The Attorney General of Bangladesh submitted that ‘Shahidul Alam had criticised the Government’. The chamber judge did not agree to stay the order, and instead listed it for hearing on referred the next day before a full bench.  On 9th August, the full bench adjourned the hearing of the Government’s petition till 13th August as the matter was already listed in the High Court.

Dr Alam has been arrested in connection with a case under Section 57(2) of the Information Communication Technology Act for publishing statements online which among others ‘hurt the image of the nation’. The minimum penalty is seven years and the maximum is fourteen years imprisonment.

Section 57 of the ICT Act has been widely criticized by Bangladeshi and international rights groups, who have repeatedly asked for its repeal because of its draconian power to silence free speech, journalism, and citizen voices. According to Human Rights Watch, “scores of people have been arrested over the past five years in Bangladesh under section 57 of the ICT Act for criticizing the government, political leaders, and others on Facebook, as well as in blogs, online newspapers, or other social media”.