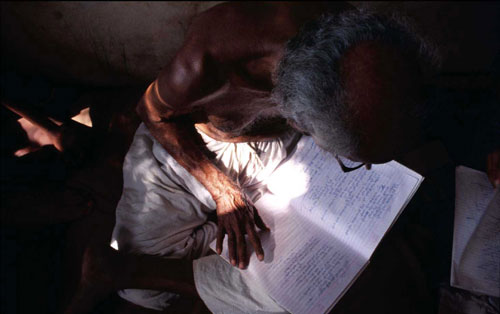 Photo Kathmandu in collaboration with Film Southasia is pleased to announce a special weekend of screenings of films by award-winning artist Amar Kanwar!

Amar Kanwar has distinguished himself through films and multi-media works, which explore the politics of power, violence and justice. His multi-layered installations originate in narratives often drawn from zones of conflict and are characterized by a unique poetic approach to the personal, social and political. More about the artist below.

This rare opportunity to view this range of works by one of South Asia’s most respected artists of our times, is underscored further by the fact that he will be present through the weekend at the screenings!

All screenings will take place at the Chhaya Center, Thamel, 6th floor above QFX. Seating is limited to 50 per screening so please arrive early to ensure seats. Seats will be on first-come-first-serve basis. All screenings are free and open to the public.

From the British colonial empire to the globalisation of today, from the anti mining tribal resistance in Kashipur and Gandhmardhan in Orissa, the mass movements in Chattisgarh to the coastal communities in their struggle against big ports and industrial parks in Kutch and Umbergaon – the film Azadi documents and presents insights into many different peoples struggles in India.

Based on a narrative that integrates several anonymous first person narratives King of Dreams is about creating a passage through the ‘stereotypical’ terrain’s of masculinity and sexuality in India. It’s about sex and the violence that can operate in the familiar space where desire meets love.

The Torn First Pages is a 19 projection video installation in three parts. Presented in honor of the Burmese bookshop owner Ko Than Htay, who was imprisoned for ‘tearing out the first page’ of all books and journals that he sold and which contained ideological slogans from the military regime.
The Torn First Pages is also an ode to the thousands engaged in the struggle for democracy in Burma. The films directly, elliptically and metaphorically encounter resistance and the struggle for a democratic society, contemporary forms of non-violence, political exile, memory and dislocation.

The Face juggles, dissects and accelerates images of General Than Shwe, the Supreme Head of the Burmese military dictatorship as he tosses rose petals an extra time for the press photographers at the cremation memorial site of Gandhi in Delhi. Footage for this film was clandestinely shot at the ceremony at Rajghat on the 25th of October 2004, The General had been invited by the Indian government and was on a state visit to India. The film literally unveils ‘the face’ of military representation by zooming in on the features of the General who is known for the distance he keeps from cameras. The manic repetition of the general’s pose in front of the media reveals the tragic ludicrousness of the act as it critiques the support of the Indian Government to the Burmese military.

Thet Win Aung– In 1998 the Burmese student leader Thet Win Aung was sentenced to 59 years in prison for having taken part in organizing student protests since 1988, when he was a high-school student. The film Thet Win Aung is about his portrait, the passage of time, the length of his prison sentence and is about remembering him. On 16 October 2006 at the age of 34 years Thet Win Aung was killed in a Mandalay prison in Burma.

The film Ma Win Maw Oo emerges from a forgotten but very dramatic photograph of a high-school student who was shot dead by Burmese soldiers during the 1988 student protests. This photograph captured the moment when Win Maw Oo was being carried by two medical students just after she was shot. It gained worldwide publicity for a day as a news photograph before it disappeared from public memory.

The Bodhi Tree shows Sitt Nyein Aye, a well-known Burmese dissident painter, who had to escape from Burma after the military crackdown on pro democracy demonstrations in August 1988. He now lives in exile in New Delhi where he continues to practice as an artist. His studio is a small room under a bodhi tree. The fleeting glimpses of a painted portrait of Aung San Suu Kyi and Gandhi being carried down the streets, and the faces in a crowd during a political rally, demonstrates how portraits are used as markers of opposition.

Somewhere in May lies within the intersection of freedom and claustrophobia, democracy and its simulation, the holy mission of great national projects and the individual’s relationship with the politics of today. In the torturous normalcy of exile two events occur on the same day in the city of Oslo. The 17th of May celebrations of the Norwegian National Day in 2004 was also the day the Burmese military dictatorship began a sham National Convention for Democracy inside Burma. Through the ‘Democratic Voice of Burma’ (DVB), a small radio station in Oslo, the Burmese resistance reports on this sham convention as it broadcasts news that is secretly heard by thousands within Burma.

The film Such a Morning is a modern parable about two people’s quiet engagement with truth. In the 85-minute film, a famous mathematician at the peak of his career unexpectedly withdraws from his life and retreats to the wilderness to live in an abandoned train carriage. Creating a zone of darkness so as to acclimatize himself before total darkness descends, the professor begins to live in a realm bereft of light. Thus starts an epic sensory journey into a new plane of emotional resonance between the self and the surrounding world. A parallel story about a woman emerges within the course of the film, providing a compelling, analogous narrative to the protagonist’s. Over time, the professor records his epiphanies and hallucinations in an “almanac of the dark”, an examination of 49 types of darkness that emerge as a series of letters.

There is perhaps no border outpost in the world quite like Wagah, the border between India and Pakistan, where this film begins its exploration. An outpost, where every evening, people are drawn to a thin white line… and probably anyone in the eye of a conflict could find themselves here.

An assassination, a gallery and a silent curse.

Is it possible to understand the passage of time through poetry?  And if you could, for one special moment, then would it be possible to see the future?

The film travels across India trying to understand the past, the severity of conflict and the cycles of change. The different poetic narratives merge together, allowing us to see a more universal language of symbols and meanings. The moment when this merger in the mind takes place is the moment of prophecy.

The Many Faces of Madness is a short film that emerges from the reality of ecological destruction and the appropriation of the commons in India.

A Love Story is a miniature narrative in four acts where time becomes fluid as the image is distilled to its inner self. The film lies at the fringe of the expanding Indian city, a world of continuous migration and therefore of continuous separations. It is in this terrain of separation that A Love Story is located. Sequentially, cyclically and simultaneously, it becomes the companion, the prelude, and the postscript to The Scene of Crime. This film can also be seen as an offering to mainstream cinema, a space where we often lose ourselves in the repetitive spectacle of grand love stories.

The Scene of Crime is an experience of a landscape just prior to erasure. Almost every image in this film lies within specific territories that are proposed industrial sites and are in the process of being acquired by government and corporations in Odisha, India. Every location, every blade of grass, every water source, every tree that is seen in the film is now meant to not exist anymore. The Scene of Crime is an experience of ‘looking’ at the terrain of this conflict and the personal lives that exist within this natural landscape.

More about the artist:

The screenings are organised in collaboration with